I will quit if my own people don’t want me, says Maharashtra CM Uddhav Thackeray amid political crisis

In a multi-layered emotional speech, Thackeray says any non-family Sainik can be CM, but has Eknath gone too far to take the olive branch? 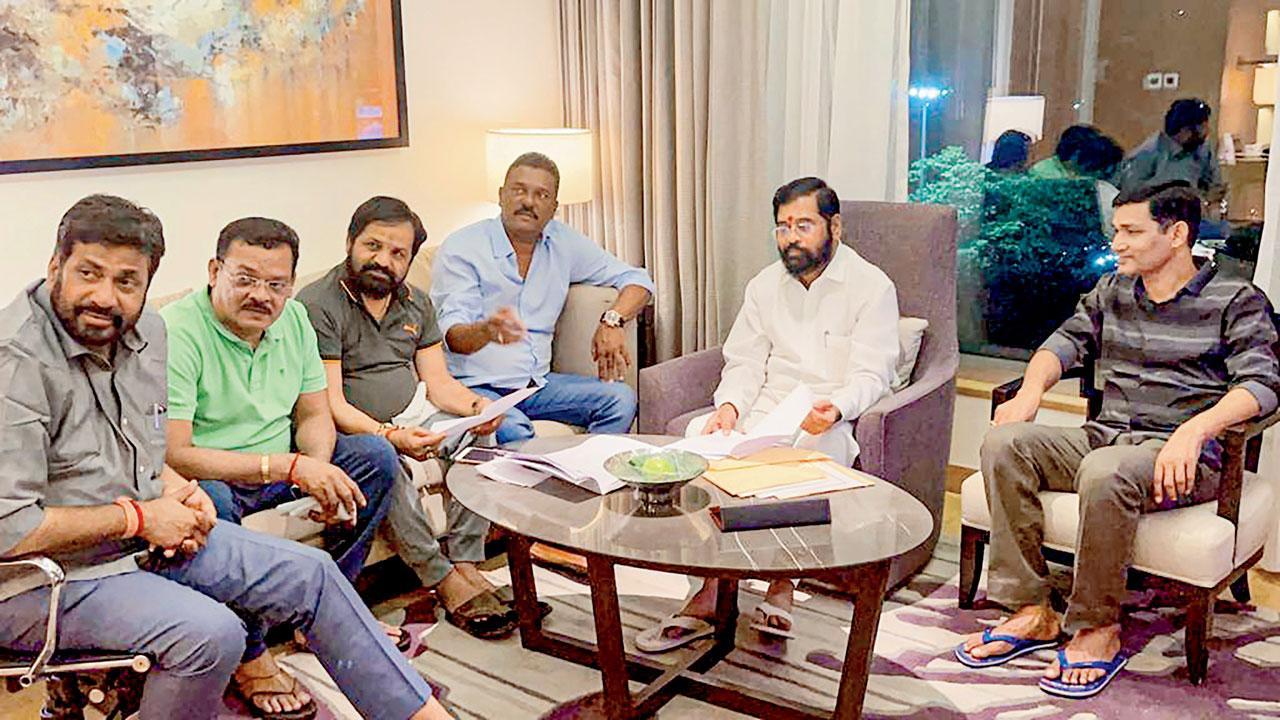 Rebel Shiv Sena leader Eknath Shinde with MLAs at a hotel in Guwahati, on Wednesday. Pic/PTI


With no resolution in sight to placate rebel Shiv Sena MLAs led by Eknath Shinde who flew to Guwahati from Surat overnight, Chief Minister Uddhav Thackeray came out with an emotional yet firm pitch to address the concerns of his partymen on Wednesday. He once again appealed to the rebels to return, and even offered to give away his powers in return. However, it is to be seen if Shinde is still willing to return to the Sena-fold. After the CM’s speech, he tweeted, asking the Sena to “quit the unnatural alliance [with NCP and Congress]”.

The Shiv Sena supremo said he would resign from the post of both the CM and the party president, if even one rebel or party worker tells him that he was unfit to carry out the responsibilities. 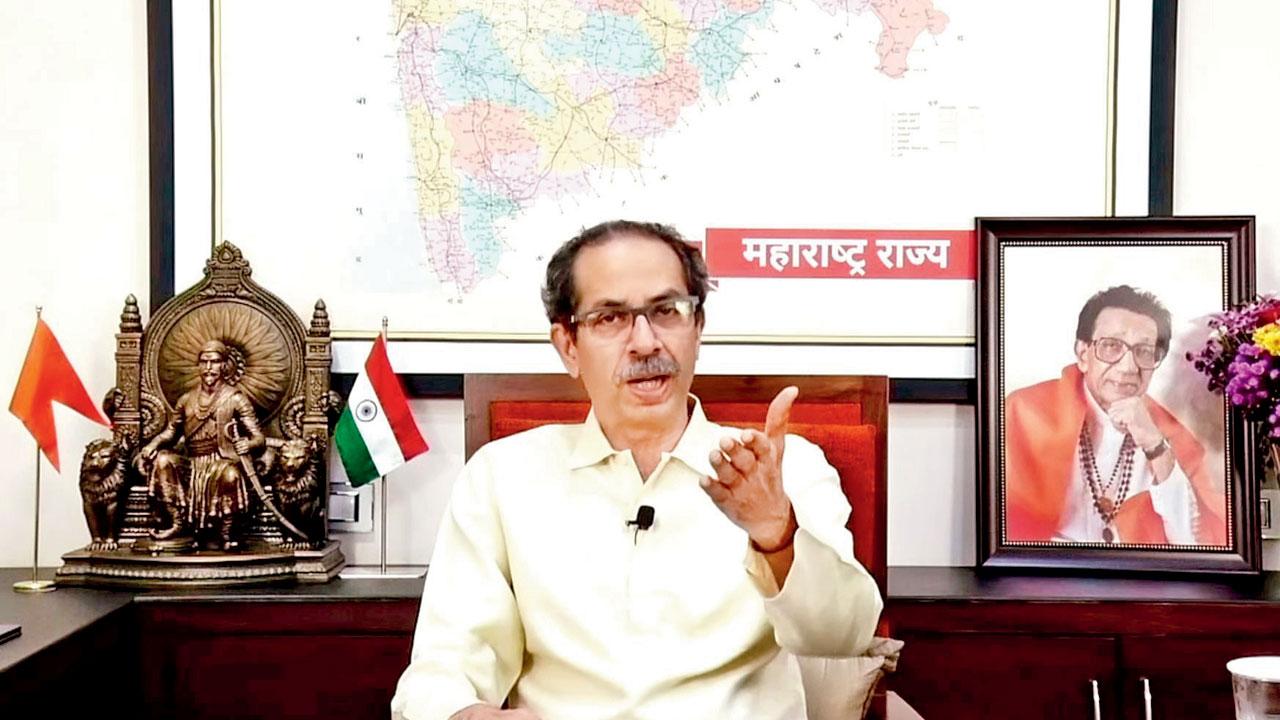 “I’m not selfish. I’m not helpless. Come here or call me to tell me that I’m nalayak [unworthy] as the CM. I will keep my resignation letter ready. You may carry it to the governor. What will happen? We will have to fight [elections] again. I’m not scared as long as my Shiv Sainiks are with me,” he said, adding that he was shifting to his Bandra residence from the CM’s official bungalow Varsha. He moved to Matoshree later in the evening.

He put up a question for the rebels: What if [after joining hands with BJP] a Sena member does not become his successor? What if someone else succeeds him? It was clear indication that even after joining forces with the BJP, the rebel group will end up with nothing and left to the mercy of the bigger partner. In their conversation on Tuesday, Thackeray told Shinde that the Sena had suffered most when it was with the BJP and it shouldn’t suffer anymore by forging an alliance once again.

Does Thackeray mean Shinde will be made the CM if he returns to the Sena-fold? Shinde, however, with support of more than 40 MLAs, seemed to have gone far ahead and was not willing to return. In a tweet after the CM’s address on Wednesday, he said it was pertinent to “quit the unnatural alliance [with NCP and Congress] because the Shiv Sena has suffered while the other partners benefited the most”. 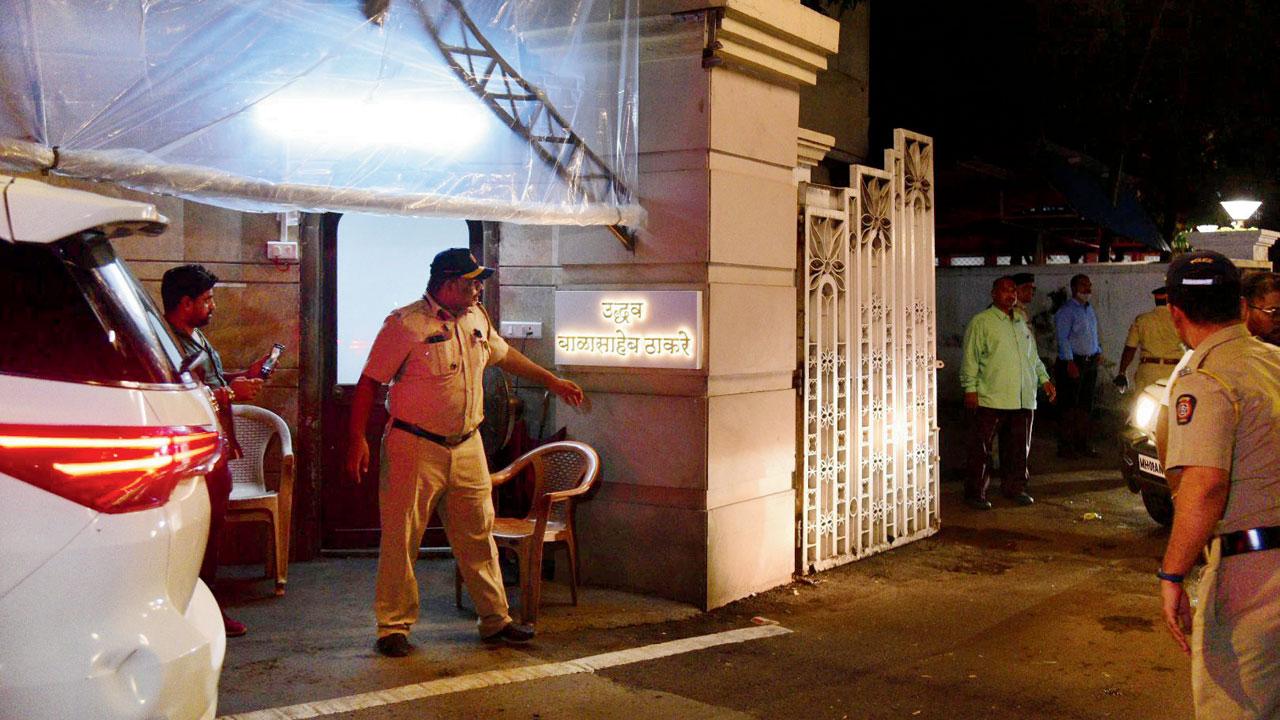 Preparations underway for CM Uddhav Thackeray to move out of his official residence, Varsha, on Wednesday. Pic/Pradeep Dhivar

Thackeray said he was disheartened because his own people were demanding his removal. “It could be understood if the Congress and the NCP wanted me to quit, and yet they have put all the trust in me. If my own people don’t want me, they should tell me so. I don’t know why they are doing this.”

The CM said he took up the challenge of leading the government against his wishes. “I didn’t have any experience. Pawar saheb asked me to lead and Soniaji also wished the same, because they felt that without me, the government will not run as there were several senior leaders in the Congress and the NCP.” He added that the performance during the pandemic placed him among the top five best CMs in the country.

Affected by Covid-19, Thackeray spoke online from Varsha where he has been meeting party and MVA leaders. Speculation was rife on Wednesday that Thackeray was going to recommend the dissolution of the Assembly. He attended a weekly Cabinet meeting online, which had the minimum attendance of the Sena ministers, but the Congress and NCP ministers were in full strength to stand in solidarity with the Sena chief. The Cabinet meeting, which according to many would be the last for the MVA, went on smoothly, said many ministers.

‘Hindutva gave you all’

The CM said it was the same Sena that fought alone in 2014 to win 63 MLAs and suffered many setbacks. “The same Sena, the mother has been betrayed by her own… This (my appeal) isn’t a naatak (drama). I mean what I say. For me, the numbers are a minor thing. I will quit even if one MLA votes against me. In democracy, the one having numbers wins,” he said.

46
No of MLAs’ support Shinde claims to have