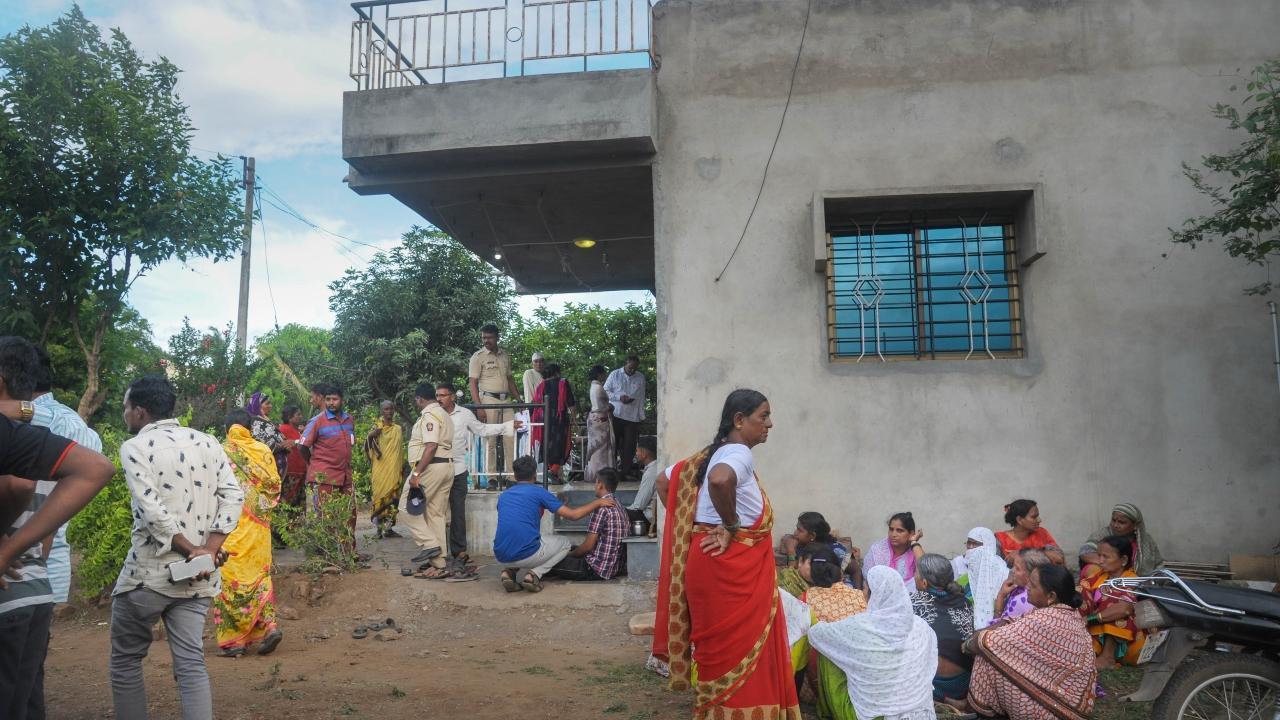 Locals gather outside the house after nine members of a family allegedly committed suicide, at Mhaishal village, in Sangli. Pic/PTI

A day after nine of a single family were found dead in two separate houses in Mhaisal in Sangli, the police have arrested 13 people out 25 who were booked by the Miraj rural police on Monday.

The arrested accused will be produced in a court on Tuesday, the police said.

“13 people have been arrested so far,” Superintendent of Police, Dikshit Gedam confirmed to mid-day.

According to the police, the Sangli police on Monday had booked 25 people in connection with the mass deaths. The police have suspected an alleged ‘suicide pact’ in the matter. The bodies were later sent for post-mortem to identify the exact cause of death.

On receiving the information on mass deaths on June 20 morning, the senior police officials rushed to the spot to investigate the case and learnt that the family of brothers – Popat Vanmore (56), Dr Manik Vanmore – their mother, wives and four children had died on the same day.

The matter came to light after a girl from the village had gone to Vanmore’s house to check as to why nobody from his family had come to fetch the milk from them and found the bodies. Upon learning about the deaths, some people decided to inform Popat Vanmore about deaths and found that even Popat Vanmore and his family were no more.

Investigations led the police to two suicide notes which hinted at money lenders pressure on the family, an official said.

The police registered an FIR under sections 306, 341,504 and 34 of the IPC and under relevant sections of the Money Lenders Act after it was found that the family had taken loans from money lenders who had been pressuring them for interests and repay of money, an official said.

The primary investigations have revealed that the accused had been pressuring the Vanmores to repay the money and had been allegedly threatening them for the same due to which the family had been reeling in constant fear and mental pressure.

The police strongly suspect that the family allegedly consumed poisonous substance to end their lives as there were no external injury marks on their bodies. The police is awaiting for post mortam reports to identify exact cause of the deaths.

Reportedly, Popat Vanmore was a teacher and Manik Vanmore worked as a veterinary doctor.