Supriya Sule says PMO declined permission to Deputy CM Ajit Pawar to speak in the presence of the PM; at another event, Uddhav Thackeray and Narendra Modi share the dais after a long time

Nationalist Congress Party (NCP) leader Supriya Sule on Tuesday said Maharashtra Deputy Chief Minister Ajit Pawar was “refused permission” to speak in the presence of Prime Minister Narendra Modi at a temple inauguration event in Dehu near Pune city, and dubbed it an insult to the state.

Modi was on a day’s visit to Maharashtra during which he inaugurated a shila (rock) temple at the Sant Tukaram Maharaj Mandir at Dehu, Jal Bhushan building and Gallery of Revolutionaries at Mumbai’s Raj Bhavan and attended the bicentennial celebrations of a Gujarati newspaper.

Devendra Fadnavis, the Leader of the Opposition in the state Assembly, spoke just before Modi delivered his speech at the programme in Dehu. Talking to reporters in Amravati, Sule, a Lok Sabha MP, said Pawar, a senior NCP leader, had requested the Prime Minister’s Office (PMO) to allow him to speak at the event. 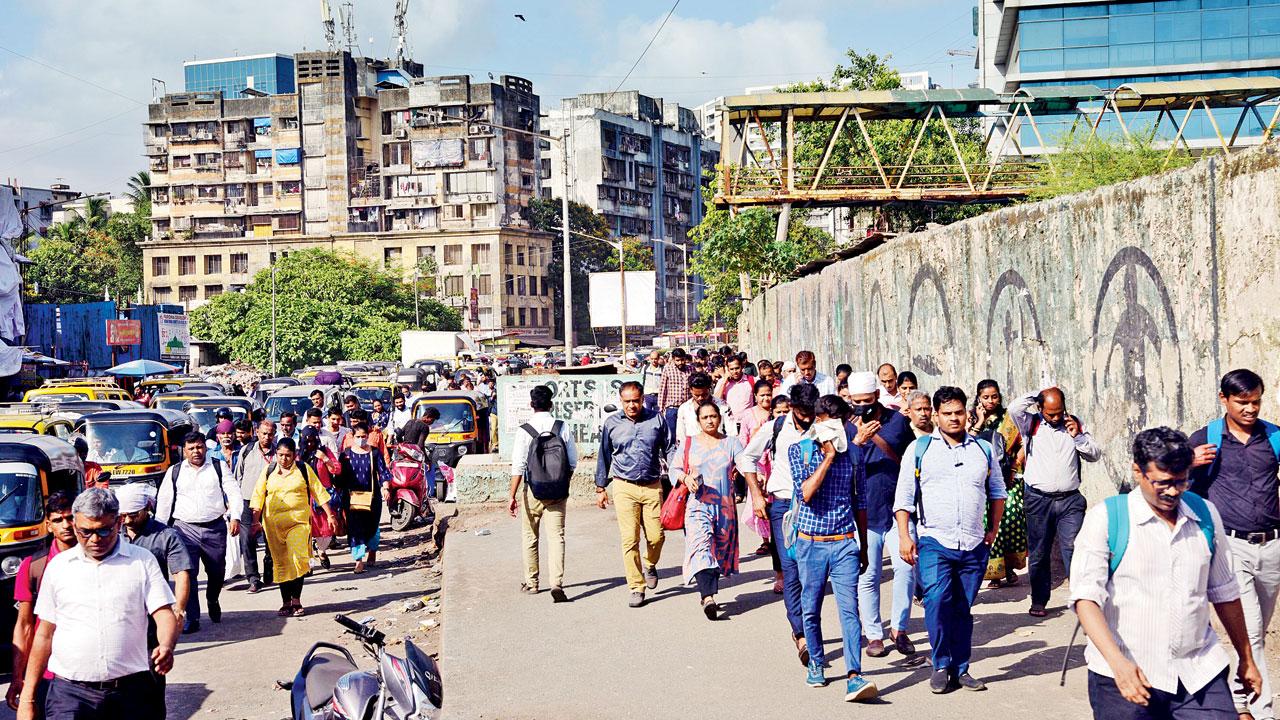 Office-goers at BKC, who were given a half-day off on Tuesday as the PM was to visit the area in the evening, head to Bandra station. Pic/Pradeep Dhivar

“Dada’s (Ajit Pawar) office had requested that he be allowed to speak because he is the Deputy Chief Minister and also the Guardian Minister of Pune. But the PMO declined permission to Dada to give his speech,” Sule said, adding she was sharing this information after verifying it from Pawar’s office.

“This is an insult to Maharashtra. If our Deputy Chief Minister is on the stage then it is his right to speak,” said the MP from Baramati in Pune district.

‘A voice to India’s freedom’

Modi then attended an event in Bandra-Kurla Complex to mark the 200th anniversary of the Gujarati newspaper. He said in his speech, “Debate and discussions have helped the country over the years and we need to strengthen the culture.”

He said every institution has a particular role to play for the betterment of the society, be it the media or the legislature. Modi said the Gujarati newspaper gave voice to India’s freedom movement, and lauded the publication’s journey over the past 200 years.

The Indian media has both criticised policies and stood for national interest in a constructive manner, the Prime Minister said, expressing hope that the media will continue to play its role in the next 25 years which his government has called the Azadi ka Amrut Kaal.

Modi and Chief Minister Uddhav Thackeray shared the dais on Tuesday after more than four months. They attended the inauguration of Jal Bhushan Building and Gallery of Revolutionaries at the Raj Bhavan and later the 200th anniversary celebration.

Thackeray said running a newspaper was a difficult task and he knew it because he has been running the Marathi newspaper Saamana for years. He said that the Maharashtrian and Gujarati  communities have amalgamated in Maharashtra and that could be seen as a Gujarati newspaper completed 200 years in the city.