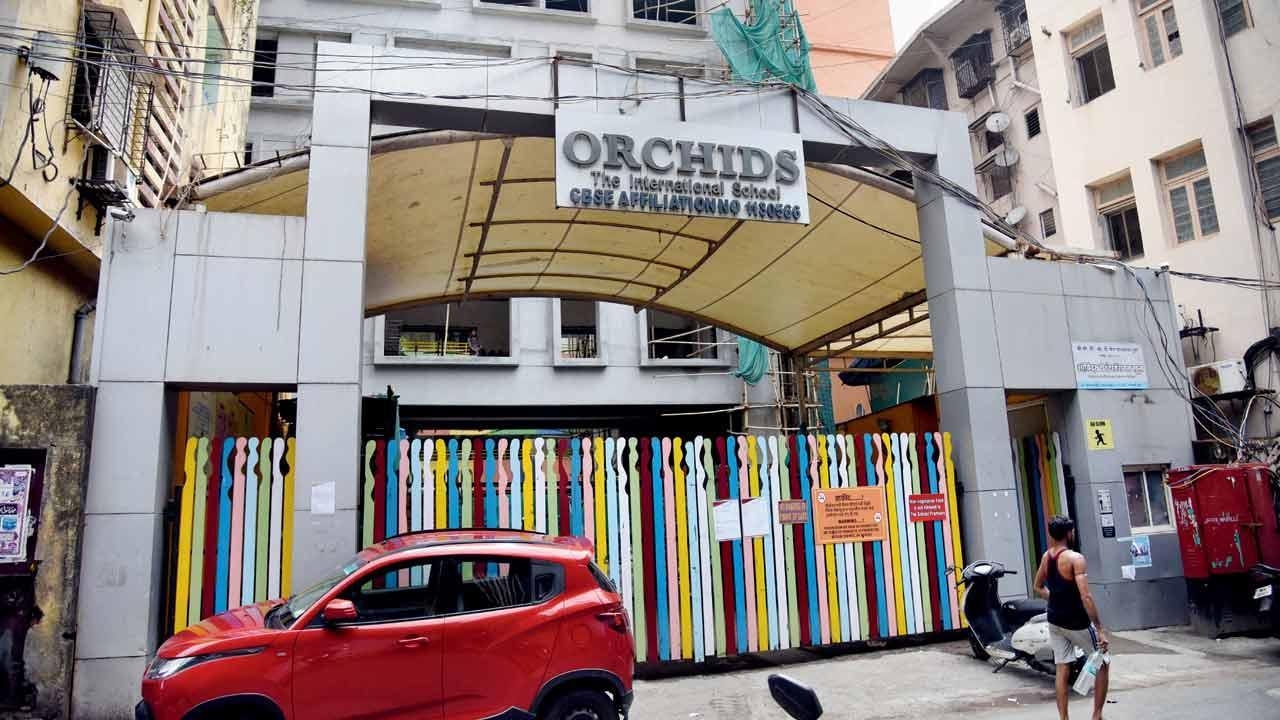 The Orchids International School at Masjid Bunder reopened on May 11, but parents allege many glitches in its operations. Pic/Sameer Markande

The parents of Std IX students at the Orchids International School, Masjid Bunder, have approached its trustees with complaints regarding its functioning. They said they have been awaiting hard copies of mark sheets for the previous three years, have fee-related issues, issues with expensive uniforms and books, etc. In their letter to the trustees on June 9, some of the parents have criticised the school’s principal, Dr Kavita Nagpal, claiming she is rude to them and has not yet addressed their concerns.

In the letter, the parents have levelled a number of allegations against the school administration. They have said uniforms are not in stock despite payments. They have also said that students’ divisions changed after ID cards were issued and that they have not been given roll numbers even a month after the school reopened, besides the other issues.

They have also alleged that they did not receive any information in advance about the school re-opening. “On May 6, 2022, we received a WhatsApp message from school telling us about orientation for Std IX students scheduled for May 9, 2022. We were only informed on May 9 that school would reopen on May 11. We had to face numerous classroom moves from one level to another, division changes, and other modifications. Students are yet to obtain their roll numbers and set divisions after one month of reopening. When we reached out to the school principal there is no proper response. Whom do we approach?” said a parent.

In the letter, the parents also narrated an incident on June 7 where some students escaped a mishap. “A big hammer fell down from the fifth floor of the school building where construction is on. A few students were waiting for the van just a little away from the spot where the hammer fell. Many parents emailed the school principal regarding this but sadly they haven’t received any satisfactory reply.”

Another parent complained that a PTA committee was not formed for Stds VIII and IX. “The principal’s replies to our emails are arrogant and rude. It’s disheartening to face such an attitude from a school principal. We had no option but to approach the trustees.”

The school’s spokesperson said they would issue a general statement and not speak about particular allegations by the parents. The statement was sent on WhatsApp to this reporter. The school also did not give contact details of the principal.

“We at Orchids-The International School take our students’ safety and education on priority and consider parents’ feedback seriously. As our Pallagully (Masjid Bunder) branch school has recently reopened for physical classes in a full-fledged manner after almost 2 years of shutting down due to the pandemic, we faced re-start-up challenges,” the spokesperson’s ‘statement said. The spokesperson also claimed that the management held a meeting with some parents.

Explaining the issue further, the spokesperson said, “In light of our very high standards of delivering educational and operational excellence over the years a certain level of expectations is set with our parents and therefore we do understand their disappointment at this point in time. We had an open discussion yesterday with a group of parents and have requested them to allow us some time to resolve all concerns. As a steadfast approach, the school authorities have formed a committee to initiate discussions with the parents to reach an amicable agreement within the next one week.  We at Orchids have assured parents on reviewing this matter with utmost seriousness and on priority, and will be resolving these issues at the earliest to the best of parents’ satisfaction.”