Rattled by a report in this newspaper, the Mangrove Cell of the forest department has registered a case against the Maharashtra Industrial Development Corporation (MIDC) for poisoning aquatic wildlife at the Thane Creek Flamingo Sanctuary. Earlier, a lab analysis of the water sample from the protected water body had shown a heavy presence of pollutants that activists called “shocking”.

Virendra Tiwari, additional principal chief conservator of forest, Mangrove Cell, said, “An official from Ghansoli office has filed a preliminary offence report under Sections 29 and 32 of the Wildlife Protection Act. The water samples are also being sent for analysis.” The sections mentioned deal with illegally entering a sanctuary and poisoning wildlife. Violators can be jailed up to seven years.

Environmentalist Stalin D of NGO Vanashakti had complained about the pollution of the creek due to leaking effluents from a pipeline running through MIDC. He presented a lab report of the water sample that showed toxic levels way beyond permissible limits, posing a serious threat to the biodiversity and marine life at the sanctuary. 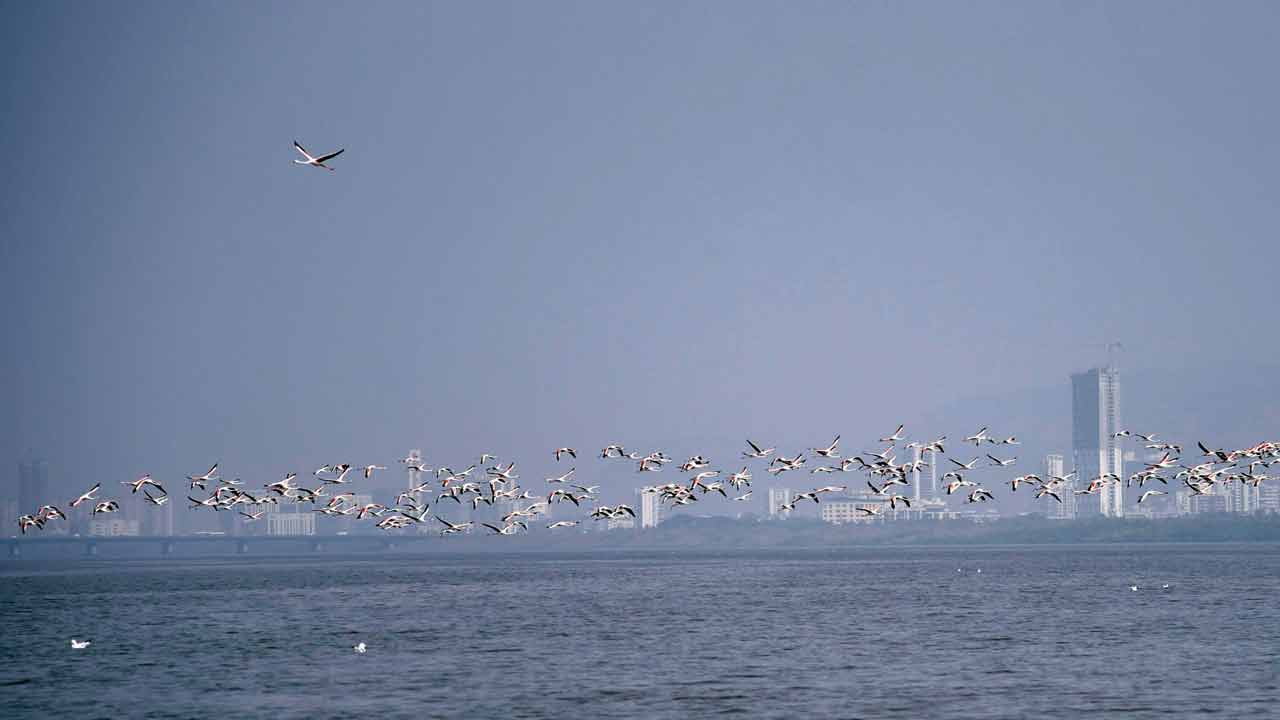 Flamingos at Thane Creek Flamingo Sanctuary. The state has recommended a Ramsar Wetland status for this water body. File pic

Principal Secretary of Environment Department Manisha Patankar Mhaiskar had also asked the member secretary of the Maharashtra Pollution Control Board (MPCB) to check environmentalists’ complaints against heavy pollutants leaking into the creek. On June 10, mid-day’s report ‘Mumbai’s most popular guests are being slow-poisoned’ said that the pollution of the creek was dangerous for flamingos as well as its aquatic life.

NatConnect director B N Kumar said the wetlands of Mumbai Metropolitan Region are being destroyed in a well-planned manner for land grab, shrinking the destinations of migratory birds like flamingos. Describing migratory birds as ambassadors of the environment, Kumar said that the Bombay Natural History Society (BNHS) has warned several times that the loss of these wetlands could lead to migratory birds causing chaos in the air, posing danger to aircraft.

Following complaints from NatConnect, the Union Ministry of Environment, Forest and Climate Control has sent ‘top priority’ messages to the State Wetland Authority to look into the allegations. The state has recommended a Ramsar Wetland status for the Thane Creek Flamingo Sanctuary, while the Navi Mumbai Mumbai Municipal Corporation tagged its area as a Flamingo City as part of the Swachh Bharat drive. All these efforts will be useless if the migratory bird abodes are not being taken care of, Kumar warned.

BNHS and the forest department have drawn up a joint Thane Creek Flamingo Sanctuary Management Plan for 2020-30 under which six wetlands—Belpada, Bhendkhal, Panje, NRI, TS Chanakya in Navi Mumbai and Bhandup—are to be conserved as satellite wetlands to accommodate flamingos which are known to fly to these areas during high tides.

Planning agency CIDCO, however, has refused to accept the wetlands’ existence and is “hell-bent on burying them”, Nandakumar Pawar, head of Shri Ekvira Aai Pratishtan said.

1.3 lakh
Approx no of flamingos that visited Thane creek this year