Counting for the Rajya Sabha polls was delayed because the Bharatiya Janata Party (BJP) raised an objection that three Maha Vikas Aghadi (MVA) voters had violated the conduct of election rules and the ruling party also reported irregularities by the opposition. On Friday, the development added a new chapter to the elections that turned out to be a high voltage drama because of the fierce contest between the ruling and opposition

Ministers Jitendra Awhad (NCP) and Yashomati Thakur (Congress) were accused of handing their ballots to their respective state party presidents/agents, Jayant Patil and Nana Patole, instead of merely showing them for verification as per rules. Shiv Sena’s Suhas Kande was reported for showing his ballot paper to a person other than the party’s official agent.

The MVA complained to the CEC that BJP’s Sudhir Mungantiwar and independent Ravi Rana violated the conduct of election rules as well. Mungantiwar has been reported for handing his ballot paper to the party’s agent, while Rana has been accused of showing a copy of Hanuman Chalisa. 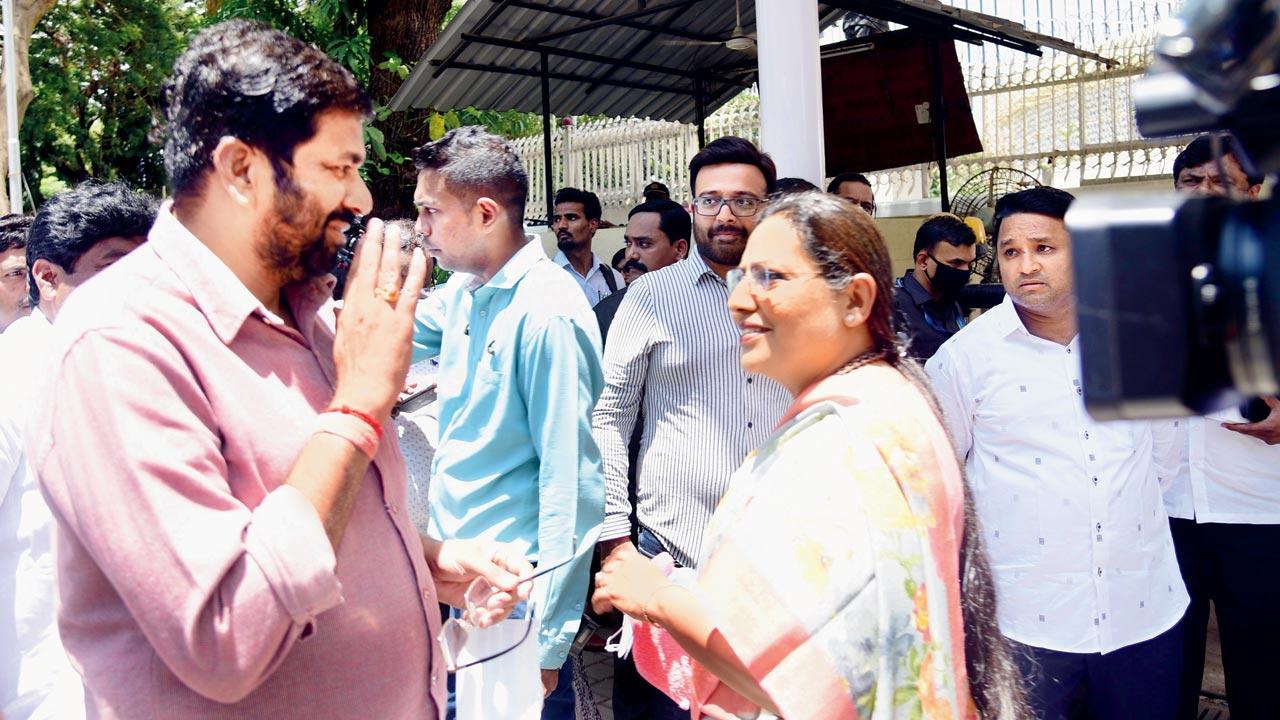 The Vidhan Bhavan’s returning officer had dismissed objections raised by both sides.

Valid and invalid votes had a great bearing on the fate of the candidates, more importantly, the BJP’s third contestant Dhananjay Mahadik and Shiv Sena’s second nominee, Sanjay Pawar. Both camps had made all possible efforts to garner votes from 29 members of smaller parties and independents. The MVA’s former home minister Anil Deshmukh and a sitting minister Nawab Malik, who are in the ED custody, were not allowed to vote by the court.

In all 285 members of the Assembly voted in the elections for six seats for which seven candidates were in the ring. Indicating the seriousness of the fight, two seriously ailing BJP members travelled to Mumbai from Pune for polling.

Rajya Sabha polls are held in open ballot voting. Every political party which has its member(s) as MLAs can appoint an authorised agent to verify as to whom its members have voted for. Independent MLAs are required to cast their vote without showing the marked ballot to any agent.

In normal circumstances, the counting was expected to start by 5 pm, but it could not begin because the CEC’s mandatory clearance was awaited till late Friday evening. The CEC was sent video footage of the incidents. In regular procedure, the returning officer, state’s chief election officer and election observer send their reports to the CEC after which the counting is permitted.

The BJP’s members demanded that the three votes be rendered invalid. Similarly, the MVA also objected to Mungantiwar’s act of handing his ballot paper to the party’s agent, Chandrashekhar Bawankule instead of showing it for verification. The objection from both sides was rejected by the returning officer which led the BJP to take further steps.

The BJP’s national delegation rushed to the Chief Election Commissioner in New Delhi with complaints from Maharashtra and Haryana. The party cited similar irregularities in the 2017 Rajya Sabha polls in Gujarat. Following the Congress’s objection over cross-voting by its members, two votes were judged invalid, paving the way for the party’s heavyweight the late Ahmed Patel’s victory. Then the counting could start at the stroke of midnight.

BJP’s election agent Parag Alwani demanded a hearing from the authorities before the votes are decided valid or otherwise. “They violated the rules, the procedure and conduct,” said the Vile Parle MLA.

The party’s senior leader in New Delhi, Mukhtar Abbas Naqvi, told reporters that a BJP delegation had met the CEC and demanded action not only in Maharashtra but Haryana as well.

Awhad and Thakur refuted the allegations. Awhad said the BJP had gone crazy and raised insane objections. “The BJP is scared because we are winning all four seats. I committed no offence. I just voted, and as per rules, I showed my vote to the party’s agent for verification. If they know it, we also know the rules,” he said.

Thakur said the BJP had been seeing defeat. “They have been creating confusion ever since the election process began. Today as well, they are up to some foul game in the polling booth.” The Sena’s first candidate Sanjay Raut said the BJP had started a foul game because its ED game had failed. “Who delayed the counting and why? Since their ED game has failed, the foul game has started. We will win in any case…” he reacted.

‘Have elections every three months’

Bahujan Vikas Aghadi president Hitendra Thakur, with three votes under his belt, kept everyone guessing on Friday. He and his two MLA colleagues arrived much later, and didn’t reveal who they had voted for. However, he said many of his Assembly colleagues called him, saying he should stay put and non-committal to any party. “My colleagues told me that because of my stand their demands were being met. It’s good that someone has benefited because of me. It will be great if such elections are held every three months,” he said, with a tinge of sarcasm.