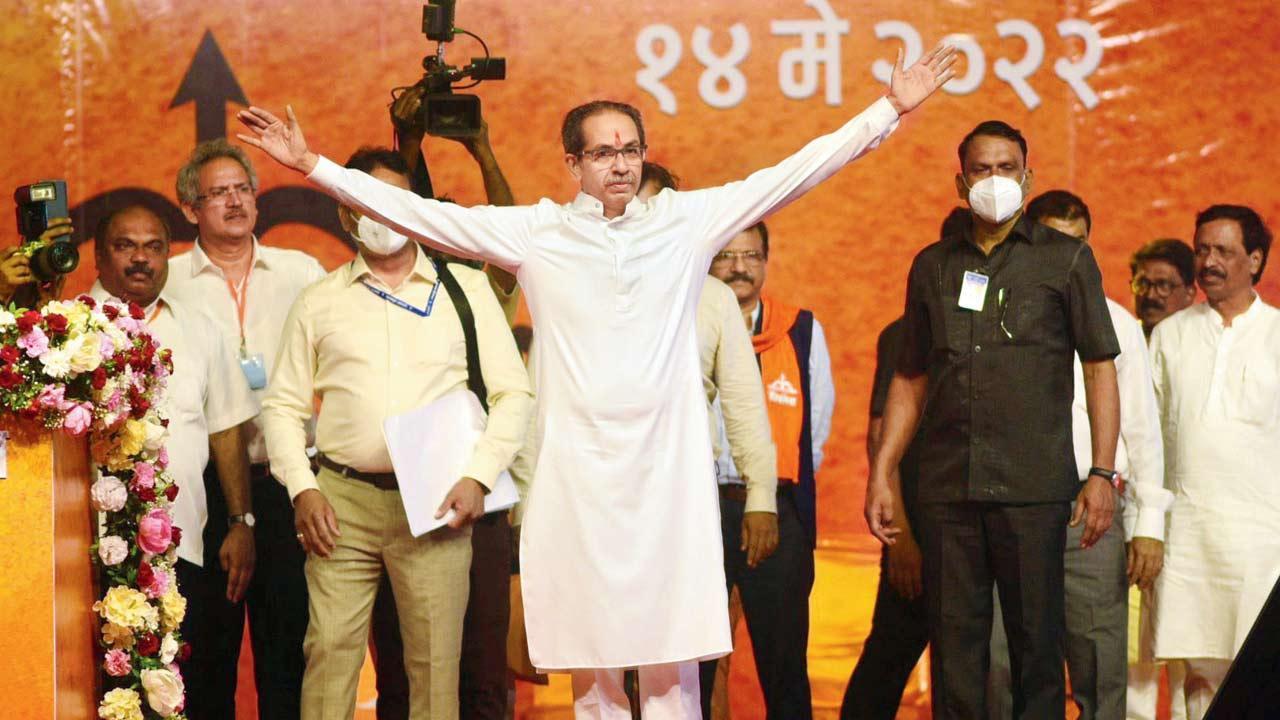 Launching a no holds barred attack against the BJP and its “alleged surrogates” including his estranged cousin, Chief Minister and Shiv Sena president Uddhav Thackeray on Saturday said there was a conspiracy to separate Mumbai from Maharashtra. He said that the BJP’s Hindutva was perverted, while the Sena’s was based on development and welfare of the people.

Thackeray, who has stayed away from criticising the BJP’s parent organisation the RSS, took his fight straight to the Nagpur headquarters of the right-wing body questioning its role in the country’s freedom struggle. He was speaking at the party’s rally at a BKC ground on Saturday evening.

Thackeray named Opposition leader Devendra Fadnavis quite often, lashed out at PM Narendra Modi, but chose to hit out indirectly at Raj Thackeray during his 50-minute speech at one of the most crowded rallies of the ruling party. He accused the BJP of defaming a progressive Maharashtra to stall its development under the MVA Government.

“Don’t misinterpret our patience for weakness,” he warned the BJP. He said the BJP’s leadership was “mentally unstable” and lacked the ability to run the country, which had lost two crore jobs in the past five years and was affected by high inflation. “They create an impression as if they are the only guardians of Hindutva in the world. Do you want a Hindu who strokes temple bells or one who tames the terrorist?” he asked, questioning the BJP over law and order in Jammu and Kashmir, where Hindus have been killed by extremists.

Taking digs at the RSS, he asked, “Did the RSS take part in the country’s freedom struggle? Who broke away from the all-party front during the movement for united Maharashtra?” He said that it was the BJP’s predecessor, the Jansangh, which quit over sharing of seats. “They have been trying to separate Mumbai since then,” the CM said.

The CM claimed that Modi had given an “ultimate remedy for COVID eradication” at the CMs’ meeting. “[Instead of discussing COVID] He asked us to reduce VAT on petrol and diesel. But there is no guarantee as to when the Centre sends us our GST share. All they want is Mumbai for their own good,” he said, appealing to Sainiks to never leave the city at the mercy of others like the BJP and fight it out as they have done in the past. The statement is important in view of the forthcoming BMC polls.

Thackeray said Fadnavis spoke in his master’s voice when he called for freeing the city in the BJP’s May 1 rally. “It is his master’s wish to separate Mumbai. But don’t forget that the Marathi manoos sacrificed his life to ‘earn’ Mumbai. Whoever tries to break the city away from us will be broken into pieces,” he stated further.

Without naming the MNS president, Thackeray said that some people were behaving like the hero of a Hindi movie, Lage Raho Munnabhai, who sees Mahatma Gandhi in his dreams. “This person thinks he is Balasaheb [Thackeray] when he roams around wearing a [saffron] shawl. But at the end of the picture the hero understands that it has been happening because of chemical locha. Such Munnabhais are walking around these days,” he added.

Thackeray said the BJP was sledging the Sena (and MVA) to divert its attention from governance. “Fadnavis should ask the Centre to solve Mumbai’s problems like land for metro shed and Dharavi redevelopment. “All these projects have been stalled by the Centre,” he said, inviting the BJP to work with the government, which according to him was prepared to withstand any onslaught by the BJP’s “untrue ways”. “If you have guts, fight straight with us in the people’s court. Let people decide the government. Don’t give stones in people’s hand,” he said, citing an example of neighbouring Sri Lanka where a hassled citizenry has toppled the unjust leadership that has ruined their country.