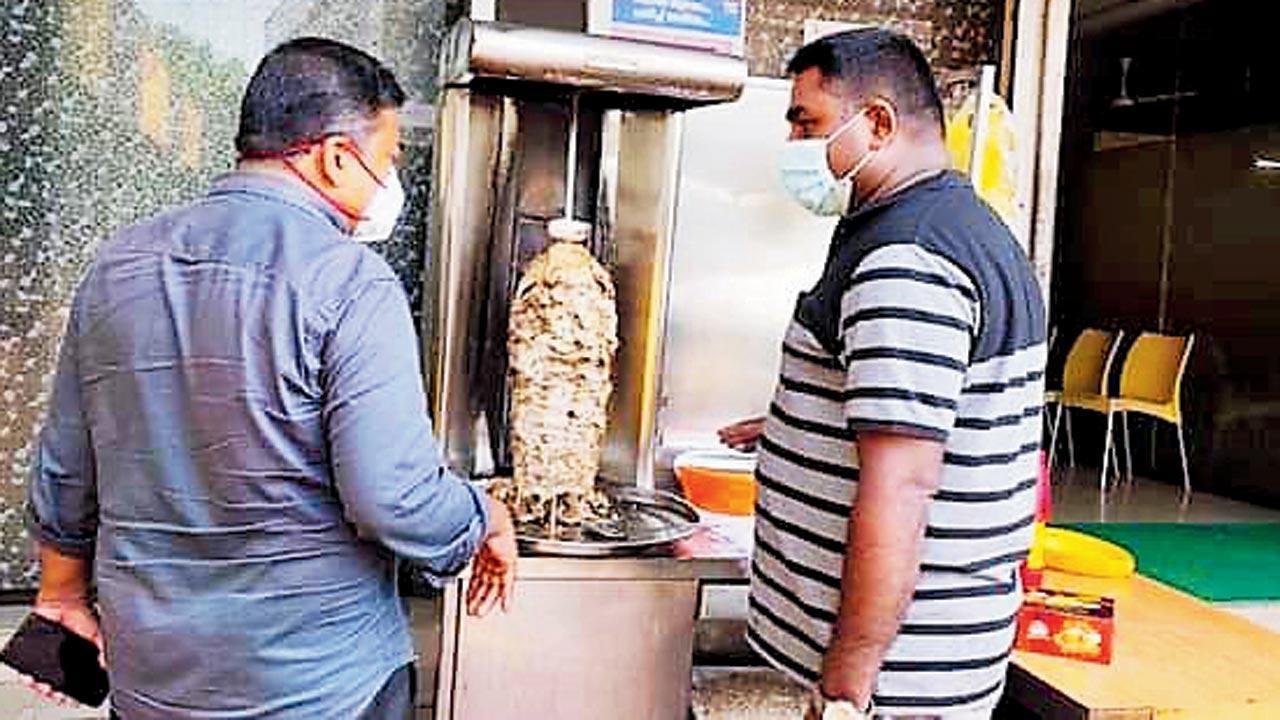 Following the detection of Shigella and Salmonella bacteria in shawarma samples days after suspected food poisoning in Kasaragod district of Kerala claimed the life of a 16-year-old girl and left 58 unwell, health experts have cautioned Mumbaikars against eating roadside meat, especially during summer.

V R Vinod, Commissioner of Food Safety, Kerala, said they got the test report on Saturday confirming the presence of the above bacteria in shawarma samples. “Also, the pepper samples collected from the said food joint in Kasargod also tested positive for Salmonella. We have intensified our crackdown on shoddy roadside food joints,” he said.

Vinod said they have so far collected 125 samples from across Kerala and have destroyed 161.50 kg of chicken that was spoiled or kept in an unhygienic condition. Of 1,481 food joints inspected, Vinod said, 132 were found to be violating the FSSAI guidelines. He said, “Also, notices have been issued to 226 joints for violation of FSSAI norms, incuding operating without licence.” The state has come up with a helpline—1800 425 1125—for people to lodge complaints against food joints for violation of food safety guidelines. He quoted the Center for Disease Control (CDC) in the USA, which said that every year there are 80 to 165 million Shigella cases worldwide and 6 lakh Shigella deaths annually.

“…Shigella dysentery outbreak from roadside Shawarma-style meat dhabas should be treated as a public health alert in all states. The classical route of transmission of Shigella bacteria is from infected faeces to the mouth of the new host. This happens when a food handler is a Shigella carrier and doesn`t wash his/her hands with soap and water…,” said Dr Subhash Hira, Professor of Global Health at University of Washington-Seattle.

If meat is not cooked properly bacteria and worms can persist in it. “In metro cities, the public at large is fond of street foods and meat preparations like shawarma, which are common everywhere. When it comes to roadside food joints or dhabas, across highways, we do not know the hygiene parameters in such eating joints,” said Dr Santosh Bansode, HoD, Emergency Medicine, Wockhardt Hospitals, Mumbai Central.

Stressing that contaminated water is yet another significant source of spread of Shigella, Dr Ketan Vagholkar, Professor of Surgery at DY Patil Medical College, said citizens must report to their physician if they develop symptoms like loose, watery stools with blood in them.

A senior official from Maharastra Food and Drugs Administration said they have been holding awareness programmes on hygiene and sanitary practices for food joints. FDA has also certified certain pockets in Girgaum Chowpatty and Juhu as ‘Clean Street Food hub’. “We will also educate the street food vendors on the Kerala incident, and ensure that they take adequate care of maintaining hygiene while cooking meat and non-vegetarian food, especially Chinese food,” said the official.

Attempts to contact BMC health officials did not yield any result.

. Wash hands with soap and water before any sexual activity or handling food, or after going to toilet or changing a diaper
. Dispose of soiled diapers in a covered garbage bin
. Avoid swallowing water from ponds, lakes or swimming pools
. Avoid roadside food, particularly meat, during summer months
. If you or your partner has had diarrhoea avoid sex for at least 2 weeks