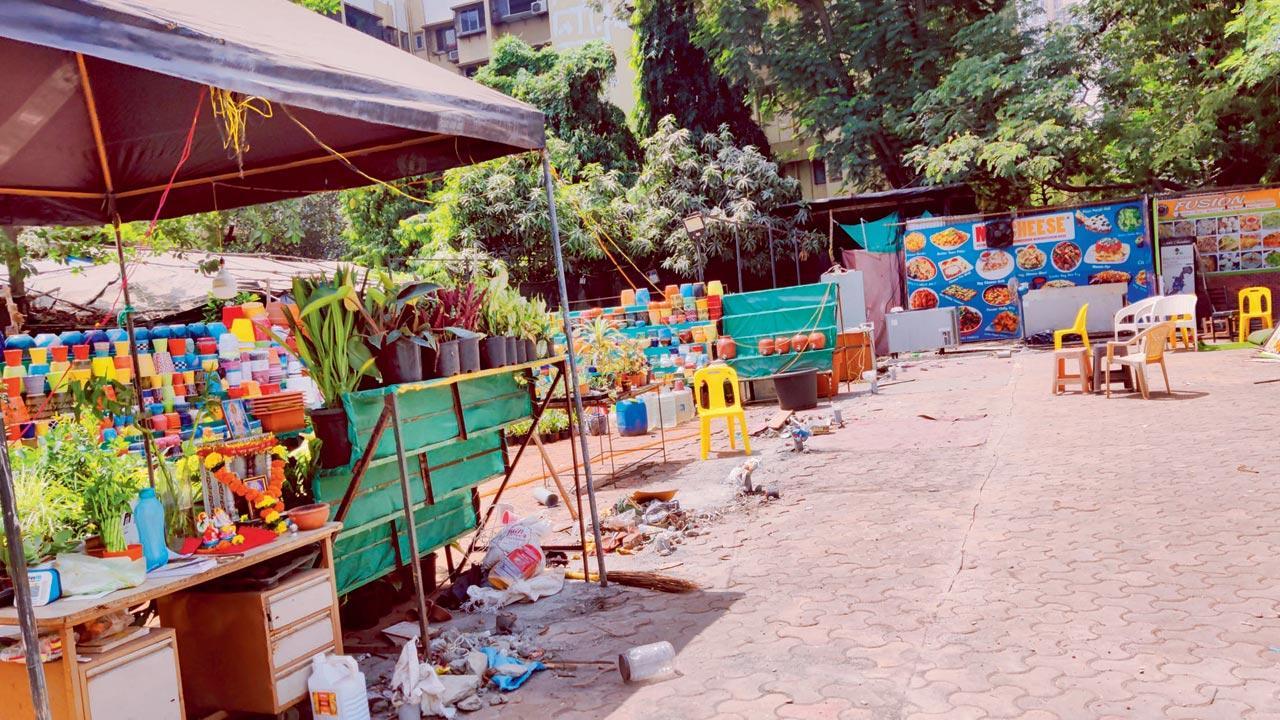 A clutch of eateries that had popped up under the banner Borivali Chowpatty at Shimpoli, allegedly on government land, have dismantled the joints following a series of reports by mid-day. This newspaper’s exposé also prompted Revenue Minister Balasaheb Thorat to order a probe and take action against officials who helped the land-grabbers start the alleged illegal food hub in the first place.

Spurred by mid-day’s report of the brazen land grab, the BMC and the collector’s office had earlier sent notices to the eateries seeking their explanation. Officials said the BMC found that it never gave any permission to run the food stalls.

Even the Borivali Chowpatty signboard has been pulled down

Locals and activists said 10-12 stalls were set up about three months ago on R M Bhattad Road at Shimpoli in Borivli West. Spread over 15,400 sq. ft., the illegal ‘khau galli’ was named Borivali Chowpatty, dishing out fares like pani puri, pav bhaji, ice gola and chaat. In no
time, the stalls began doing brisk business, they said.

The stalls under the banner of ‘Borivali Chowpatty’ came up about three months ago and began doing brisk business in no time. Pic/Nimesh Dave

mid-day visited the spot on Sunday and found all the stalls dismantled and the ‘Borivali Chowpatty’ board removed. Few labourers were packing the materials.

Chavan added, “They sent us documents claiming ownership of the land where they were running Borivali Chowpatty… We are waiting for the report from the ULC department and after the report we will take action.”

On his part, Revenue Minister Balasaheb Thorat has also asked the BMC to take action against the land mafia and officials who possibly helped the encroachers.

‘Not the only grab’

Reji Abraham, president of United Association for Social Educational and Public Welfare Trust, called the alleged land grab “the tip of the iceberg”. “This is the result of brazen, largescale and regular connivance between political proxies and enforcement authorities concerned from revenue Mumbai suburbs and BMC zone seven in north Mumbai.”

Abraham said, “…The garage and nurseries are still operating as they seem confident there will be no prosecution at Borivali police station as authorities are delaying mandated action clearly waiting for the violators to get judicial stays misusing loopholes in the legal system.”

Abraham alleged massive misuse of more government land. He said 116 acres of conditional leased land parcels at Charkop industrial zone and 392 acres of Kora Kendra conditional leased plots between Charkop and Borivali West Shimpoli have been grabbed despite repeated complaints. “This is due to massive corruption spread across departments from revenue, BMC, police and involvement of powerful elected political leaders. Even honourable Lokayukta is seized of all issues. Hope corrupt officials will hopefully be taken to task sooner than later,” he added.