Trapped in a vicious ‘power’ circle 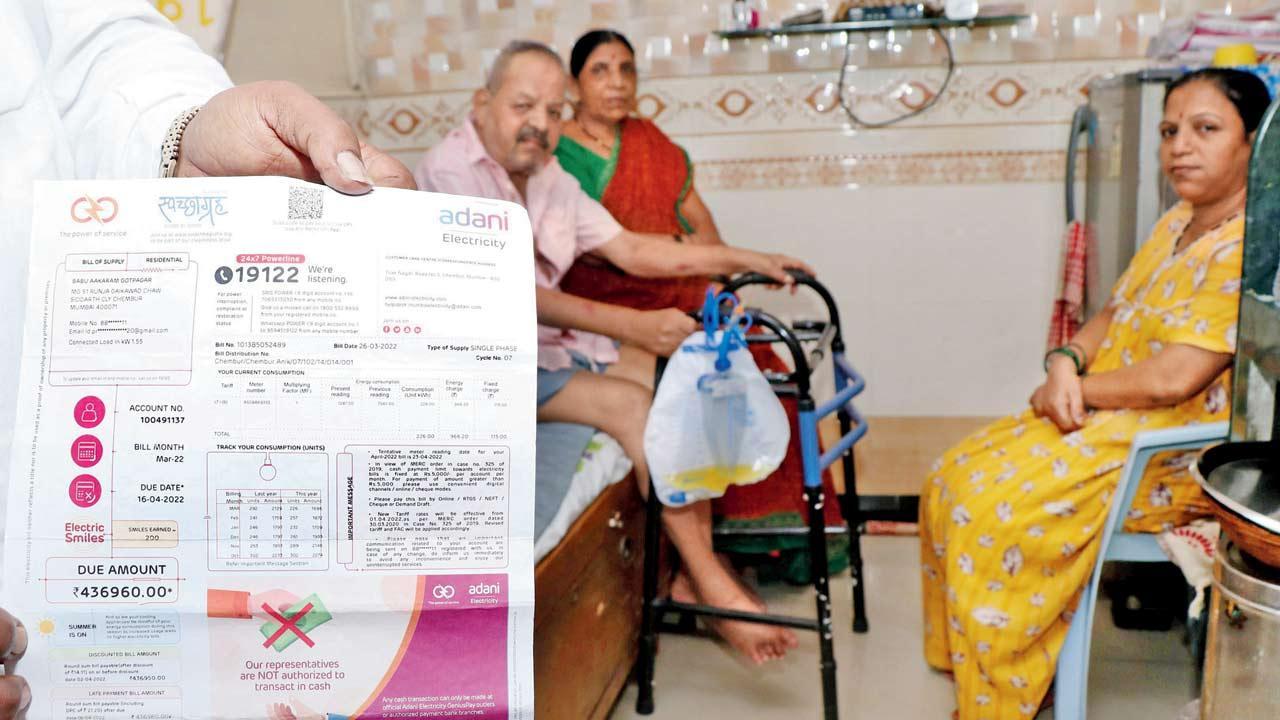 Residents of Chembur’s Siddharth Colony, who are staring at an outstanding bill of R102 crore, are on tenterhooks as their longstanding power issue continues to remain unresolved since 2004. The colony, situated between Eastern Expressway and Sion-Panvel Highway, houses over 20,000 people, many of whom come from lower middle-class households.

Due to the outstanding bills, Adani Electricity Mumbai Limited (AEML), the power distribution company often disconnects their electricity supply.  On Friday, for instance, electricity was disconnected for nine hours. It was later restored in the evening, but disconnected again on Saturday at 7.30 am. To counter this, residents allegedly resort to pilferage of power. Sources in the Mumbai police told mid-day that more than 200 residents have been booked for pilferage since March 15, earning the ghetto the name of “thief colony”.

Siddharth Colony has 3,500 hutments housing over 20,000 residents, most of whom belong to lower middle-class families

The longstanding issue has not only started affecting their day-to-day life, but their overall progress, say residents, adding that their boys aren’t getting good proposals for marriage as people are aware of the problems of the colony. While some of them want to sell off their property, they are unable to do so as the buyers want them to deduct the pending bill amount from the sale value. This bill varies between Rs 5 and Rs 10 lakh for each household.

Residents say the mess began in 2004, when a local muscleman-turned-politician started convincing residents about redeveloping Siddharth Colony. “Since the colony is strategically located, a builder also started making his footprint in the area to convince the residents about the SRA [Slum Rehabilitation Authority] project,” said advocate Raj Kamble, who also lives in the same neighbourhood, and has been fighting legal battles for the residents of the colony. The two men assured the residents that they’d not have to pay their power bills, as they would take care of it. The SRA project was eventually stalled.

“Till date, four real estate developers have stepped in, all promising to redevelop the colony and clearing our pending electricity bills, but their promises were in vain,” shared Kamble, adding how these developers lured the residents by offering them gifts during festivals.  “They  have all played with the emotions of the residents of this colony,” he added. Almost 90 per cent of the residents of Siddharth Colony have not paid their power bills since 2004.

AEML is the third power distribution company after BEST and Reliance Power in the area. In March, AEML had asked the residents to pay the bill pending since June 2019, and gave them 15 days to comply. One of the residents, Raju Ghegadmal, said, “We are demanding a statement from Adani officials for every person they are claiming has an outstanding bill. We should know how much money we have paid till date and how much is pending because I don’t understand their process of levying interest on the bills. It seems like a vicious circle, which just doesn’t end.”

Another 79-year-old resident, Babu Gotpagar, said in 2018, the previous electricity supplier had disconnected electricity for 27 days. “The current supplier also disconnected electricity in 2019. Instead of putting us through this, they should resolve the issue once and for all.” Distraught with the betrayals, residents formed the Siddharth Colony Ghar Hakka Sangharsh Samiti in March 2021, which decided to go to court. For the last eight months, the samiti has been fighting the case at the Bombay High Court.

“We have done everything till now, took our delegation to meet AEML, met the CM’s secretary, informed local representatives, but we don’t see any solution in the near future. We even arranged a public meeting and urged residents to pay the bills. The residents don’t mind paying the bills, but with the way things are going, the only option left with for us is to begin an agitation,” said Lahu Kamble, member of the samiti.

In official statement AEML told mid-day that “there are only a few customers who have paid the outstanding amount from June 2019”. “Since the majority of consumers are not paying, those who have paid have to face action too. Whenever AEML officials go to disconnect supply to the defaulters, they face hindrance, abuse and at times, threats. We disconnected electricity on Friday, and will continue to take action against the defaulters.”