The couple behind viral stadium proposal 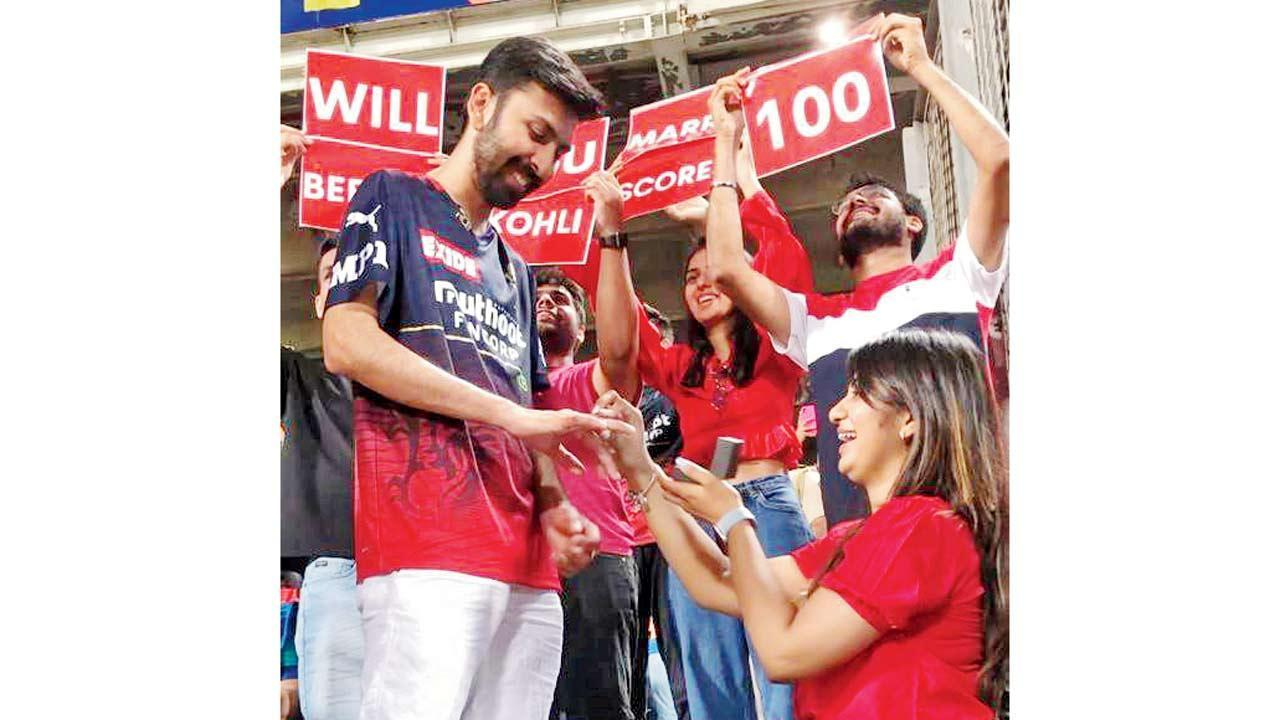 Raj loves cricket, and has also played at his college. And he is a big fan of Virat Kohli and RCB, so my daughter decided to propose to him at the stadium where the team was playing against CSK,” Chirag Shah, father of Heta Shah, told mid-day after the couple got engaged on Thursday.

Heta proposed to Raj Viren Negandhi on Wednesday, during a cricket match between Royal Challengers Bangalore (RCB) and Chennai Super Kings (CSK) at the Maharashtra Cricket Association Stadium in Pune.

During the match on Wednesday, Heta got down on her knee at the stadium and proposed to Raj in front of thousands of people. She also gave him a letter, reading: “Will You Marry Me?” The couple’s friends were also present at the stadium and they cheered as Heta proposed.

Heta and Raj have been friends for eight years, and during later years they fell in love with each other. They finally got engaged on Thursday at a banquet hall in Kandivli.

Heta is a resident of Chandavarkar Road and Raj is a resident of Jayraj , in Borivli. Both work in Ireland and came to Mumbai to attend the wedding of Raj’s sister. They hadn’t seen their families for two years, owing to COVID-19.

Chirag told mid-day, “He is big fan of Virat Kohli and RCB, and has also played cricket at his college in Ireland. After the IPL started, my daughter had decided to propose to Raj and wanted it to be a memorable event, so she decided to ask him to marry her during a cricket match. She arranged this surprise, and called their friends to Pune for the match, where she finally proposed to him.”

“Until it happened, even we didn’t know that she was going to do it in Pune. I found out while watching the match on TV at home. I was surprised. She had also prepared a love note where she asked: ‘Will you love me as much as you love cricket?’,” Chirag recalled.

The couple at a get-together on Thursday evening

“I prepared a plan to propose to Raj in the stadium, but I was not sure if I would be able to make it happen. So I wrote a love letter and gave it to him first and later I asked him to marry me. When I proposed, my heart was racing with excitement,” Heta told mid-day.

Raj said, “I assume our friends had already told the cameraman about the proposal, as Heta’s proposal was on screen. We hadn’t decided to marry this year, so I was planning to propose to her. But Heta hit a sixer. I am very happy.”