`Aarti as sacred to us as azaan, allow loudspeakers at the Shirdi Sai Temple` 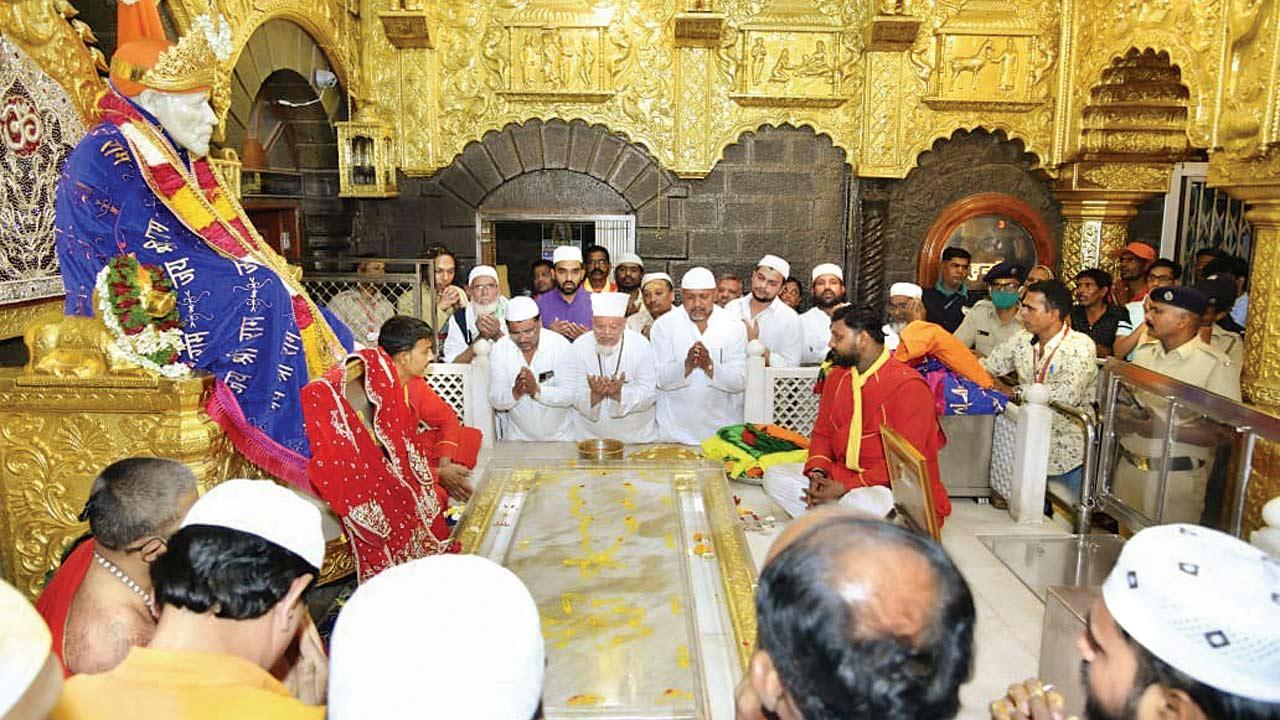 The din on the use of loudspeakers on religious places continues, but what prevails over it is the unique bond between communities. Muslims in Shirdi have requested the local police and civic authorities to allow the Saibaba temple to use loudspeakers to amplify the aartis. Expressing their disappointment in the Shirdi Saibaba Sansthan Trust’s decision to stop using loudspeakers, members of Shirdi’s Jama Masjid and local representatives of the Muslim community have written to the authorities on it.

The trustees, in the letter to the local police station, Superintendent of Police – Ahmednagar, CEO of Shirdi Sai Sansthan, local elected representatives, and the Tehsildar have said, “It is not appropriate to sever the strong bond and unity that Shirdi’s Hindu and Muslim communities have shared for centuries. Why should a footling debate involving the use of loudspeakers be publicised in this way? Despite the fact that we have decided not to broadcast morning Azaan on loudspeakers in accordance with the Supreme Court order, we request that kakad aarti be broadcast on loudspeakers on a daily basis as usual. (SIC)”

Maharashtra Navnirman Sena (MNS) chief Raj Thackeray had issued an ultimatum to the state, asking that mosques stop using loudspeakers during azaan. Thackeray had also announced that if this practice is not stopped by May 3, MNS activists will play the Hanuman Chalisa on loudspeakers outside mosques across the state. The issue brought back into focus the Supreme Court’s guidelines on the use of loudspeakers. In a verdict delivered in 2005, the apex court had ruled that loudspeakers or public address systems could only be used between 6 a.m. and 10 p.m.

Every day, five aartis are performed at the Shirdi Sai Baba temple. The major ones that most tourists and locals want to attend are bhupali aarti (5 a.m.) and kakad aarti (5.15 a.m.) in the morning, and shej aarti or shayan aarti at 10 p.m. The temple authorities stopped using loudspeakers on Wednesday in accordance with the SC guidelines, upsetting locals.

Following this on Thursday, the Jama Masjid Trust in Shirdi, submitted the written request to the Tehsildar’s office as well as to the Shirdi police station. “Don’t sacrifice our age-old tradition for political gain. Please allow loudspeakers at Shirdi Sai Temple for kakad aarti,” Shirdi’s Jama Masjid trustees stated. Elaborating on their stand on the loudspeaker issue, Jama Masjid Trust’s Secretary Haji Sayyed Ibrahim Hussain said, “The general public has no objection to communities using loudspeakers. These are all purely political issues. Whatever it is, we do not want to sever the brotherhood that has existed for generations. Aartis at the Shirdi Sai temple are as sacred to us as azaan. We believe that many devotees who visit Shirdi and are unable to enter the temple for Aarti should be able to hear it over the loudspeaker. This will be unfair to them.”

Members of the Jama Masjid Trust, Shirdi hand over their letter requesting the Saibaba temple be allowed to use loudspeakers, to the police

Talking to mid-day, member, Mohamadiya Jamat Khana and head of the Urdu Education Society at Shirdi, Haji Abdul Gani Aziz Pathan said, “We have been living in Shirdi for four generations now. Many of us begin our day by listening to Bhupali and Kakad Aarti. We grew up hearing stories from our grandparents that Sai Baba never practised any particular religion other than humanity. He supported and helped people of all faiths who were in need. Shirdi residents all do the same thing and live in peace. We Hindus and Muslims celebrate all of our festivals together. On Ram Navami, when Hindus celebrate Ram Janma Utsav, Muslims perform the Sandal/Chandan procession and apply sandal paste to Saibaba’s samadhi. We hope that tradition continues in the same way that it has for generations.”

Gulabrao Patil, police inspector at Shirdi police station confirmed receiving a letter from the trust. “The masjid has already stopped using its loudspeakers as mandated by the Supreme Court guidelines. From Wednesday even the Saibaba temple has ceased broadcasting aarti on loudspeaker. As for the appeal by the community leaders and ama Masjid trust, we do appreciate and respect their sentiments however we cannot takedecisions on individual cases but will have to follow Supreme Court guidelines,” he said.

According to Bhagyashree Banayat (IAS), CEO of the Shri Saibaba Sansthan Trust, Shirdi, the Saibaba Temple has not completely discontinued the use of loudspeakers. Banayat stated that the Sansthan officials strictly adhere to the guidelines imposed by the Supreme Court. “On Tuesday evening, we received a letter from the local police station informing us to follow the SC guidelines. As a result, from Wednesday night and on Thursday morning, May 4 and 5, the bhupali, kakad, and shej aarti were performed over public address systems while keeping decibel levels to 45db, as mandated by the Supreme Court. I have heard about the trust’s letter but am yet to receive it; we appreciate their kindness and gesture. It’s encouraging to see communities standing up for one another and respect one another’s feelings. “ Banayat added.