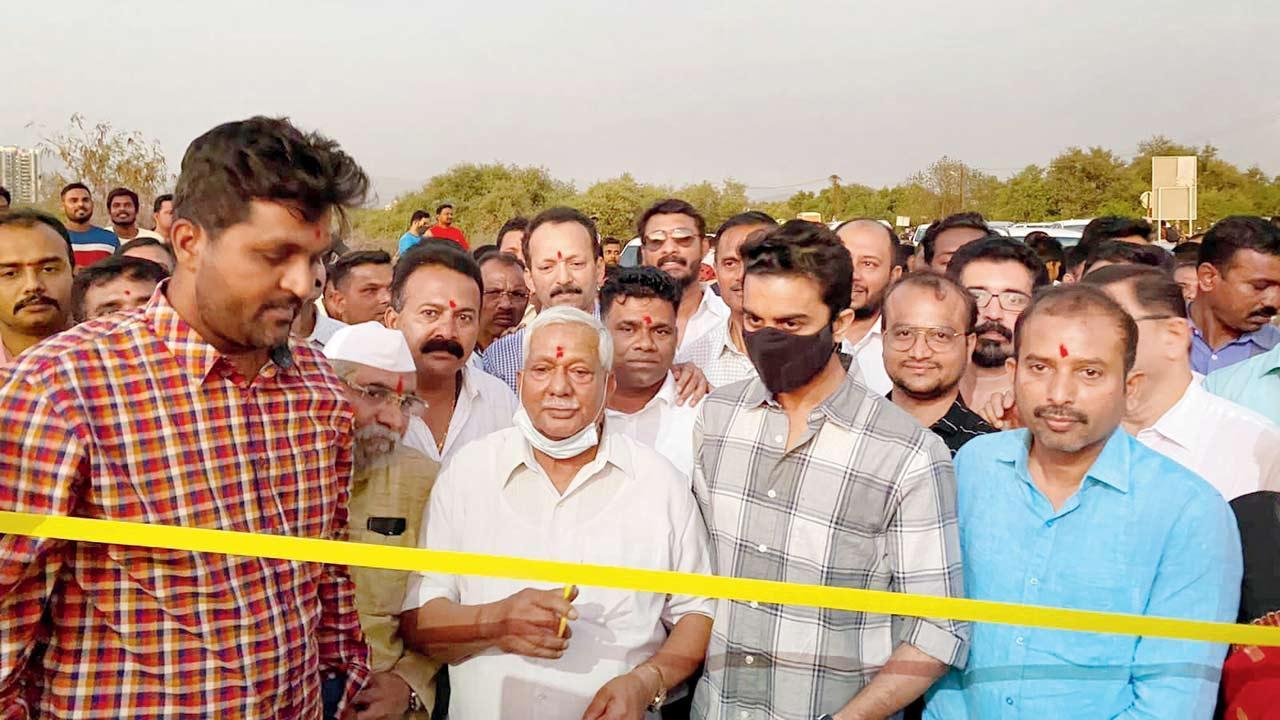 The much-awaited Naigaon road overbridge (ROB), a crucial connector between the east and the west, has finally been opened to the public. A former village sarpanch, in the presence of a local MLA, inaugurated it on Wednesday evening. The MMRDA completed the 1.3-km bridge on April 1, but its opening was stuck as the government couldn’t decide on the minister to cut the ribbon.

In a cover-page story on April 19, mid-day underlined how the bridge was caught in red-tape and awaited a minister for inauguration. Talking to mid-day, former mayor of Vasai-Virar City Municipal Corporation (VVCMC) Pravin Shetty said, “The bridge was ready, but it was not opened to the public. A few days ago, mid-day published a story about it and revealed how it awaits a minister for inauguration. Local residents, who were at the receiving end, started asking why the Bahujan Vikas Aghadi (BVA) wasn’t opening it if the state government is yet to decide the minister.”

Barricades put up on the east side of the bridge to prevent motorists from crossing over, in Naigaon, on Wednesday

“Since public wanted to use the bridge, former sarpanch Bhalchandra Chaudhary, in the presence of MLA Kshitij Thakur, inaugurated it on Wednesday evening,” Shetty told mid-day. “We have no issue if a minister comes and inaugurates it [again],” Shetty added.

The opening of the bridge, a crucial connectivity between Naigaon east and west, resulted in a brief ego clash, as hours later, according to a source, local police arrived on the bridge to “check if there was any law and order problem”.

“Police apprised the Mumbai Metropolitan Region Development Authority (MMRDA) officials and the ends of the bridge were barricaded,” said the source, adding, “Later, the barricades were removed again by the locals.”

Bikers find a way to squeeze past the barricades

By Wednesday night, mid-day saw that the bridge’s arm towards the West was open, but commuters couldn’t get down in Naigaon East as the authorities had barricaded that end again, said the source. Motorcyclists were seen stuck on the East side.

After cutting the ribbon, Chaudhary, 78, said, “I had also laid the foundation stone for the bridge and I got an opportunity to inaugurate it, too. I am happy that people in Naigaon will be much relieved now.” MLA Thakur said, “I was in Mantralaya when people called me, requesting my presence, as they had decided to open the Naigaon bridge. So, I joined them.”

“The bridge was made by the MMRDA long back, yet the locals had to suffer and travel extra miles. I am happy that now their distance has been shortened by almost 15 km,” said Thakur. Activist Ashish Vartak said, “Hundreds of local residents were present for the inauguration. We could see people beaming, as the bridge cut short their journey, and now they can reach Mumbai faster.”

A few minutes later, locals brought a crane to move the barricades to the side

The locals were finally able to take the bridge on Wednesday. Fish trader Govind Dindekar said, “I am thankful to mid-day for highlighting our plight. Though I don’t understand English, I saw my photo and people told me that it’s a very good article on how the local residents and fishermen are suffering, even as the government awaits a minister to inaugurate it.” “Thank you for giving us the much-needed respite. Now, we will reach Bhayandar and Mumbai much sooner,” said Dindekar, who lives in Naigaon West.

A resident of Naigaon East, Jerry Roderigues, said, “It’s a really good news that the bridge has been opened to the public. Since all the government establishments, including tehsildar office, court, hospitals, etc., are in Naigaon West, our travel there would get shorter. Thank you for amplifying our plight, mid-day.” The students of Naigaon East were also filled with gratitude. They will now be able to save time and fuel for their commute to Vasai West.

Dharen Kulkarni, a local, had told mid-day, “Now, patients and pregnant women in Naigaon East won’t have to travel for hours. They will reach a good hospital quickly, within minutes, as the bridge has been opened for public use.” Calls and messages to MMRDA’s Metropolitan Commissioner SVR Srinivas, who previously told mid-day that the final touches are pending, went unanswered.

April 1
Day the bridge was completed